Our wine cave is the heart of our operation, where the majority of the year’s work happens. Excavation began on the cave in June 2007 and was finished in December of the same year. It was dug into a hillside of 125-million-year-old granite.

We are grateful to have this amazing space for our winery operation. Caves are a natural environment for the creation and aging of wine. Caves maintain a relatively constant temperature (between 55-65F). They also maintain a relatively constant humidity (about 80%), which lends itself well to barrel aging and storing of wine, as far less is lost to evaporation during the three-year aging process. Since barrels aren’t completely airtight, over time wine evaporates; in a wine cave the amount of wine that evaporates over time is greatly reduced, leaving more wine to sell and to drink!

Once the harvested fruit is brought to the cave entrance, we all gather to process the grapes, which are first run through a crusher/de-stemmer. From there, it’s pumped from the crusher to the tanks, which are stainless steel 1½ ton open top fermentation tanks. The Syrah juice is then topped with Viognier, which has been picked to be about 3% of the blend. Over the next three days, the must goes through a “cold soak”, where it’s kept cool and let the Syrah’s colors and flavors begin to saturate the must. After the cold soak, the Rhone Valley inoculation of yeast is added, and fermentation begins. Over the next 10-14 days, the “cap” of grape skins is “punched down” every 8 hours, to keep the skins wet and extracting color and flavor into our Estate Syrah. 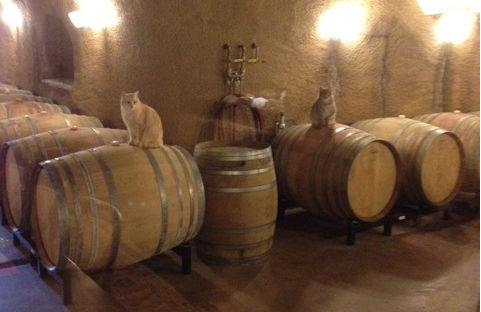